Have you ever been to the Grand Canyon in miniature?

Amazing sunset! It’s something that you have to see with your own eyes to believe… 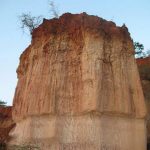 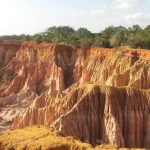 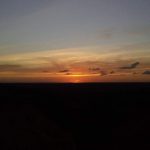 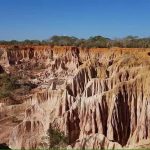 Departure from hotel at 08:30 am direction; Golden Beach, where we will spend the morning under the sun or walking at the beach until 11:30 am.

Later, you will go to the Robinson Island to the restaurant for lunch (crab, shrimp, fish, oysters, coconut rice with tomato sauce). After lunch, a small break until 15 : 30 pm.
We will leave and go to the Devil’s Kitchen.

This place is situated 40 km northwest from Malindi where you can see the amazing colours of the geological depression Marafa, called by the natives “Nyari” which literally means “the place that breaks alone ,” even though the real title which is better known this place is “the devil’s kitchen”.
Just around 1 hour drive from Malindi, along a original route between large clearings, villages and forests of acacia, we will arrive at this unique and evocative place. The Hell’s kitchen was originally a place characterized by sandstone and the effect of rainfall has eroded over the course of millennia, giving rise to a canyon where pinnacles, canyons, towering spiers and winding structures (as high as 30 meters ) alternate creating a unique show.

You will walk through this kind of small canyons, where their colours vary during the day according to the inclination of the sun’s rays.

You will enjoy in taking hundreds of photos enchanting you with the typical colours of Africa !

Shortly before sunset, return to the hotel.

The favourite country by worldwide tourists

Reasons Why Kenya Should Be Your Favourite country To Visit

For centuries, Kenya has always been one of the favorite destinations of Europeans, at the beginning by the rich industrialists for safaris, where the colonial landowners aspired to the “big game”. They also loved to enjoy the beautiful climate that this country offers.
Fortunately, the big game has been banned and the Kenyan government has begun to protect its flora and fauna, establishing numerous reserve areas, up to protecting more than 10% of the national territory. It also favored the tourist and hotel activities, acquiring numerous and modern infrastructures, equipped with all comforts.

Kenya is the ideal destination for nature lovers, for the richness and abundance of naturalistic reserves, for the multiplicity of plant landscapes, for its majestic mountains and for its wonderful national parks.

Kenya is also a destination for those who love the wide sunny beaches all year round and the clear water of the Indian ocean, where you can relax and leave all your thoughts at home. Many Europeans have settled in the Malindi area to spend their long winter months
Moreover, many Italian, European and American entrepreneurs have chosen Kenya for their entrepreneurial activities.

If you dream of Africa, the real Africa, the one that will give you great emotions between the infinite savannah and the Indian Ocean in all its beauty, among the coconut palms on the beach of crystalline white sand, then your ideal destination is Kenya , the great African nation that is crossed and divided in two by the equator.

A SAFARI WITH ME? IT’S BETTER!

Why choose me for your unforgettable safari?

GUARANTEE FOR YOUR HOLIDAY

THE BEST EXPERIENCE FOR THE NATURE LOVERS

Contact us to plan your fabulous trip in Kenya